So sayeth my knees to my brain after running the Bolder Boulder.

This will serve as my “update” from last weekend, now that I’m finally finding the time to do that! I love long weekends and tend to “live ’em up” as best I can without killing myself…and boy, did we do that last weekend! Friday night was date night (as it always is) so we went to Gordon Biersch for dinner and indulged in the best hamburger known to man, margaritas for me and beers for Todd. Then we went and saw Wolverine which was good as far as that’s concerned (and Hugh Jackman is nothing to balk at….homina-homina!), but the story line had some spots that made absolutely no sense to me. But at face value, a good action-y superhero movie…I’m glad we finally got to see it! Saturday was mostly me just hanging around after going for an early morning run with Todd in preparation for the BB. I’ll give it to Tony….running in A.M. is probably my favorite time to do that! We run a route that takes us through some of the best parts of Arvada (yes, they do exist) and it was just so peaceful that morning! By the time Todd got home from Writers Group, I was itching to go to the mall and FINALLY do my Build-A-Bear that Todd got me for Christmas! I got a cute little grey kitten and dressed him in Batman jammies…his name is Bonecrusher. Some of you will know why that’s his name :o) Then it was off to Kelly’s for movie/dinner theme night. This is one of my favorite things that happens in the summertime, honestly. We pick a movie and find some kind of corresponding dinner and all get together for a grand ol’ time. This time, it was Breakfast At Tiffany’s and breakfast foods…yum! Karla made the evenin’gs best offering – her mom’s famous morning casserole. I had two servings and threatened to eat everyone else’s helpings…it was that good. Way to go, Karla!

Sunday was a fun day in Boulder, after church, with M, P & H…M and I got henna tattoos (which are frankly way more effort than I think they’re worth. We’re getting jewelry next year), Todd got an eccentric writer’s hat, P got a free chiropractic adjustment and H got…a bottle.

Monday was THE BIG DAY!! Up and at ’em by 5:30am and at the start line by 7:30am (after a brief pit stop at an apartment complex’s clubhouse to use their bathrooms rather than Port-a-Potty’s)…I was rocking out to the random music being played at the start, while eating a banana and sucking down water.

L & R met the three of us at the start and opted to run with us rather than start in their own heat (about 15mins prior to ours) so that was fun! I’m still in a bit of shock that I ran the entire thing and did it in 66:43!! It was incredibly exciting! I’ve never had runner’s high and still haven’t had it, but I came very close when I got to the end and said, out loud, “Yeah. I could totally do that again, very soon!” We stayed around for a little while longer, watching people run in to the stadium while enjoying Michelob ultra (in a can…classy), hot dogs and various edible swag contained in our post-consumer recycled lunch sacks from Celestial Seasonings…YAY! 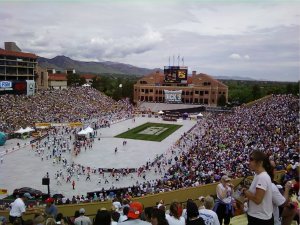 After a quick shower and nap, it was off to celebrate L&R’s new house in Wash Park, which is quite lovely!

Now it’s back to the grind…and has been that for nearly a week.

Who wants to go running???

One thought on “You will not soon forget this.”