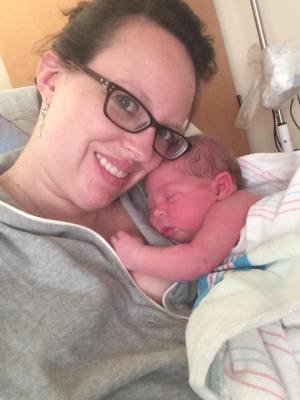 Tomorrow at 6:40am will mark the close of what has been (and likely will be, for some time) the hardest year of my life.

Who knew that a 7-pound-5.6-ounce creature could do that to a grown up?

From the very beginning, from the moment I found out I was pregnant, absolutely nothing was as I expected it to be.

I didn’t have any weird cravings. I never got morning sickness. I don’t have stretch marks (save the tiny, but fading ones where Godzilla stretched her feet out against me, a thing she still does rather routinely). I didn’t get enormous breasts. My feet swelled only a little and are now back down to their original size. My water broke before contractions started which should have meant a long, painful labor, but instead – from start to finish – it was only 8 hours and 40 minutes…and it didn’t hurt nearly as badly as I was told it would or as I was expecting it to (don’t get me wrong here. It hurt like hell and is an indescribable pain).

That’s where the good stuff ended.

Godzilla literally came screaming in to the world and didn’t stop…for days. I thought it was normal (we all think something is normal when we’ve never done it before). I couldn’t breastfeed for the life of me (or my daughter) and when I did, it was excruciating. We didn’t get the hang of it for nearly five months. She didn’t gain weight at a “normal” rate. In fact, she lost weight – a lot of it – and then didn’t gain more than an ounce or two for several months. My recovery was a pain I wouldn’t wish on anyone. Again, I thought it was normal. It wasn’t. Not exactly. Godzilla did far more damage to me than I initially knew. My doula wouldn’t even give me the complete stats on my labor and delivery until well after I was healed. Which took nearly 12 weeks. On top of that, I had some weird “other stuff” happen during recovery which needed to be chemically burnt off. Twice. I wasn’t cleared for physical activity for ten weeks and for someone who loves to be active, this was a pretty huge set-back. The sailor and I were fighting (or at least bickering) on a near-constant basis. That’s just not like us. Not really. Not that often. And then one final blow: I was diagnosed with post-partum depression.

That’s when the bad stuff ended.

I met with my midwife (at the behest of the sailor, who made the appointment for me and held my hand during all of it) and she said to me something I’ll never forget: “If it’s not normal for you, it’s not normal.” So we talked and she wrote me a prescription for some tiny blue pills. And things started to get better. My body started healing. I started going back to yoga (with Godzilla in tow). Breastfeeding got easier. Godzilla started sleeping and stopped the constant screaming. I was able to laugh and joke with my closest friends about the simultaneous hell and joy that is motherhood. The sailor and I stopped bickering as much (he still loads the dishwasher wrong).

Basically everything was the opposite of what I expected it to be.

But if someone were to ask me (and I’ve been asked a number of times) if I would do this again, the answer is an unflinching, “Absolutely!” I can’t wait to be pregnant again! I love being pregnant! Of all the expectations I had about pregnancy and motherhood, probably the most shocking is how in love with my body I have become. For someone that has struggled with body image issues for as long as I have, this still surprises me. It surprises me for a number of reasons. Because I’m not faking it. Because I’m not saying it because it’s the “cool” thing to do. Because I believe it to the very core of who I am. Because when I’m asked why I love being pregnant so much, I can answer with conviction, “Because I’m a badass.”

Of all the things that have played into my post-partum depression, my body image isn’t one of them. Yeah, I want to lose the last ten pounds of baby weight (or really, twenty pounds), but that’s so I can fit in my clothes again. I have some pretty fabulous threads. And buying all new ones? Not really in the financial cards. Nothing short of a miracle happened inside my body. As Kerry Washington said: “My body is the site of a miracle now.” And it’s true. Once a baby has been born of you, there’s no going back to a “pre-baby body”. It’s just not possible. And I am 100% okay with that.

Here lies and wakes and eats and sleeps and feeds and binge-watches and changes diapers and cries and laughs and makes caustic jokes and fights and loves and hopes for the next shrine to a miracle.