I have some concerns about going to Japan. Not enough to make me not want to go, but they are concerns, nonetheless.

First, I don’t know the language. Usually this doesn’t bother me, but the only other countries I’ve been to have been Spanish speaking, except France, but my mom (who is fluent) was there so no worries right? Plus, most other countries speak functional English (and probably more correct English than most Americans, if we’re honest).

The food REALLY scares me. Again, not enough to only eat McDonald’s (because what kind of crappy tourist does THAT?!), but enough to warrant some concern. Mostly about how it’s going to affect me, internally. Also, I hate mushrooms with the fire of a thousand suns and they’re in everything in Japan, so sayeth my brother. I also really don’t want to mistakenly eat fish testicles. I’m just sayin’. But sushi? Bring it on.

I worry that I’ll struggle with non-western bathrooms. It’s too hard to describe them, so here’s a picture. 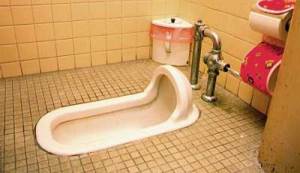 Glorious, right? How the hell does a chick use one of those??? Enough said. But the merciful thing is that most places in Japan have at least one western toilet in every women’s bathroom. So I’m really not that worried.

Getting around is going to be interesting. Walking is always a preferred mode for me when I’m travelling, but it’s also supposed to be rather rainy when we’re there so taxis and trains are going to be ideal for those times. I have no idea how an AMERICAN subway works, let alone a Japanese one! It’ll be hilarious, to say the least.

But my biggest concern?

Not having enough memory in my camera for photos. Scares the hell out of me.

4 thoughts on “Reasons I’m nervous about going to Japan”