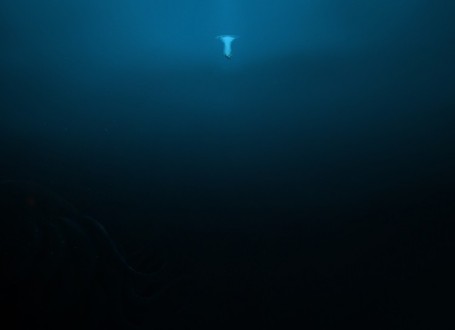 I hate the ocean. I’m terrified of it. That’ll happen when the ocean tries to kidnap you when you’re 15 years old. The beach at Charleston, SC had a rip current and none of us there knew about it and I got pulled into it. Obviously, I survived, but ever since then, getting in the ocean has been a struggle. Which sucks, because I really like snorkeling. I’m actually giving myself the chills thinking about the ocean right now. I hate the idea that the ocean is so deep, we can’t really get to the bottom of it. I see inforgraphics about how deep the ocean is and it scares the hell out of me.

The sailor told me that the first time he ever got in the ocean was when he was 22 years old. He jumped off an aircraft carrier into the Indian Ocean. It was a forty foot drop from the elevator to the ocean. He was told that as soon as he hit the water, he needed to start swimming toward the surface at a rather furious pace because he’d keep falling for a while. The weirdo opened his eyes underwater and saw the carrier’s propellors. And that’s where I have to stop listening to the story.

It’s the unknown that freaks me out. I’ve never liked not knowing what’s coming next or what I should expect. I like surprises, but in the form of parties or presents. I don’t like when life surprises me. It’s not that I need to know the future. It’s that I need the future to go the way I expect it to.

I’m a born planner. I used to live my life basically in fifteen-minute increments. I could tell you exactly how my day was going to go pretty much any day of the week. Things would come up, but I could always fit them into the existing plan.

I’m also a person that tends to “hope for the best, but plan for the worst.” I always know how much money is in all the bank accounts and have a budget worked out for a minimum of five years at a time. I can know, within about $100, what our finances will look like at any given moment because I plan for things like vacations and cars breaking down and holidays and birthdays.

So imagine my horror when something I absolutely cannot comprehend comes my way. It really throws me for a loop. I’ve been thrown for a few loops in my day and I’m never prepared for it. I don’t think I should have to be. Not those loops. I don’t expect or even want things to go perfectly. I just want them to be normal. I don’t like walking into situations and being completely blindsided. No one does.

I don’t like it when I can’t see the bottom.