Japan took me by surprise. The possibility of something, anything being as old as the things I saw there never even crossed my mind. My brother, Daniel, while living and teaching in Kyoto, had done some research into the sites he would take Todd (my husband) and me to during our visit to this mysterious and magical country. We were happy to have our own tour guide for at least part of our adventure. Trying to figure out what to see and where to go on our own could have turned ugly.

1397. The United States wasn’t even an idea yet. That’s when Kinkaku-ji made its mark in Kyoto.

I thought my heart stopped when I first laid eyes on this place. “It’s a right of passage for Japanese students to visit this,” my brother said. The air felt cool on my skin, as if peace itself was breathing on me. History rustled through the leaves of the trees. Centuries of kami rippled through the lake.

Zen. A word I said innumerable times that week. I don’t think a word has yet been uttered that can describe the serenity, the peace, the calm that I felt.

Nirvana. Maybe if Kurt had passed through these gates, things would have turned out differently.

I’m tall in Japan, even at my mere 5-feet-5-inches. “You can’t understand how huge it is until you’re looking at it.” My brother tried to prepare me, but nothing really could. Standing in front of a structure that massive certainly put “me” into perspective.

Three separate fires destroyed Tofokuji. Four times, the Gates to Nirvana have been re-built. The current temple has been standing since 1425. Columbus hadn’t even started thinking about his voyage yet.

“I feel so small here,” I said. My stature in the country was obvious, but my ability to comprehend the magnitude of its passion and history fell short of what it deserved.

Sight-seeing never lends itself very well to personal reflection. There’s always too much to see, too much to take in. So how did I manage to steal away nearly a half-hour simply to…consider? I thought I understood the idea of a Zen garden. It seems like a pretty easy concept to grasp— 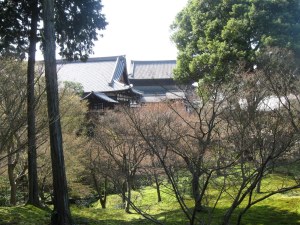 pretty trees and flowers, sand to play with, pathways. Easy enough. The quietness overcame me in a way that, for the first time in my life, didn’t frighten or disturb me. It felt good. It felt right. I didn’t have any striking moments of clarity. The busyness of my life melted away. So this is what “just being” feels like. I want to live in that place.

I was alone with my thoughts in the garden. I have spent many years trying to find balance and order, sometimes forcing it. I have talked big talks about designing my home in a feng-shui manner. But when I stood in the center of this garden, full of sakura and tiny streams, rolling lawns and prayer temples, it all seemed so silly. As if my American mind could possibly understand the depth of Japan’s way of life. The whole garden reeked of longevity and of a balance that I could never achieve. To no one in particular, I said, “I don’t want to leave this place. I want to ‘get it’.” A group of Japanese school girls passed me on a walkway back to the main gates of the garden. “Ohayo gozaimasu!” I said to them with a slight bow of my head. Good morning! They giggled and greeted me as well which, according to my brother (whose students just happened to be mostly girls), indicated that they were thrilled I had spoken to them in Japanese…using Kansai region dialect, no less. I love it here!

I want a house that sings to me. I want to live in a place where music surrounds me no matter where I go. Walking the floors of Nijo Castle, I felt artsy and full of life. The three of us removed our shoes and shuffled through the hallways. Todd’s left sock had a hold in the toe and mine were thin and grey. Daniel seemed to be the only one adequately prepared for the chill of the wooden floors. The three of us were so obviously American, but my brother, six feet tall and blond, seemed to float so easily through Japanese culture; it was as if Kyoto itself had taken up residence in his bones. “The floors creak so you know when someone is coming into a room,” Daniel explained. “It’s for protection.”

Brilliant! I thought to myself. And also a little ironic.

Something so beautiful is actually intended to warn against an attacker.

What an ingenious alarm system.

Japanese technology has impressed the world for longer than I can even comprehend.

I still want a house with floors that sing. I want to walk into a room and create a brand new musical masterpiece with every step, every day. For the rest of my life. I thought about all of the history contained within the confines of the palace as the three of us stepped outside into the courtyard, full of vendors. I smelled something familiar, yet strange. “It smells like a carnival out here!” Todd said. That’s it! I thought to myself. “That’s botamochi,” my brother told us as he bought us all the sticky sweet rice ball dessert. “It’s basically the Japanese equivalent of a funnel cake.” Nijo Castle is where I first tasted how truly sweet Kyoto could be. It was hot and sweet, it burned my mouth, and I wanted more.

1593 saw the beginnings of the beautiful castle of Osaka. What was America doing that year? It had hardly taken its first breath at that point. Settlements were barely established and this is what the Japanese were up to.

Civil unrest, bombings, and neglect all but destroyed the castle. When the castle first came into my view, I wasn’t sure what to think. I spent much of my time on the castle grounds in silence.

The history of the castle is seemingly a parallel existence to that of the Japanese people themselves. Yet they still stand, unchanged and more beautiful, more sturdy today than they were yesterday.

Mystery is a word that describes Japan most accurately for me. I spent my time marveling at what I have learned from them and what I need to, should learn, but still can’t really grasp. What would be the point of surrounding yourself with dirt and grass on one side and water on the other? No on really knows what the purpose of the dry moat is, though someone explained the possible physical logistics of this. I’ve all but forgotten. I continue to wonder: is there a deeper, meta-physical meaning that I should be trying to understand?

For the first time in my entire life, I found myself not wanting to rush home after a week away. Traveling, while thrilling, is exhausting. Here, in this place, surrounded by kind and mysterious people and places, I felt…something. Maybe it was zen. Maybe it was peace. Whatever it was, it felt right. My urges to rush about and see everything minimized in Japan. Rather, I wanted to seek out the deepest, most serene places I could and spend my time marveling and considering. Japan is a special place and will hold a piece of my heart forever. My outlook on life changes and evolves every time I go back to those memories.

3 thoughts on “On finding inner peace….”